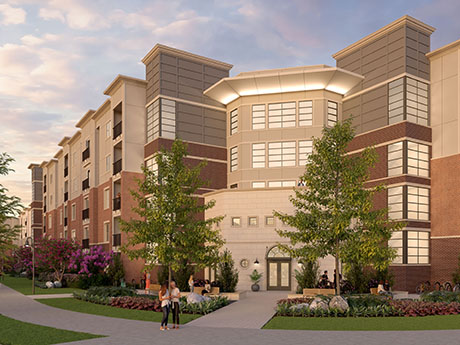 Phase I of The Vue on University is scheduled to open in fall 2021. The three-phase student housing project, from developers Fountain Residential Partners and BAM Capital, is situated near the University of North Carolina, Charlotte.

One of the most pressing issues for general contractors today is the high cost of lumber. In the past five months, the cost of lumber has increased nearly 100 percent on projects, according to Justin Walker, president of Construction Enterprises Inc. Luckily, his firm had locked in the cost of materials prior to the pandemic on all but one of its current projects.

When the COVID-19 pandemic hit, the lumber mills had to take a step back with their production and close some plants, said Walker. “The construction industry, housing market and multifamily market never slowed down, but the actual production of the mills did.”

The producer price index (PPI) for inputs to construction — a measure of both goods and services used in every type of construction — increased 2.5 percent from August to September and 3.8 percent year over year, according to the Associated General Contractors of America (AGC). The increase was driven in part by the PPI for lumber and plywood, which jumped 19 percent in September and a whopping 49 percent year over year, the most in the 53-year history of that index, says AGC.

Rising materials costs are certainly not limited to lumber. Over the last six months, the price of conduit and PVC products has risen more than 50 percent while the price of copper is up 20 percent, according to fellow panelist Mellema. “Really across the board, I think there’s a problem with the supply chain,” he said. Production stalls as a result of the pandemic triggered the disruption in the supply. The good news is that projects already under construction had materials pricing locked in.

Despite these increases, the overall cost of projects has remained relatively unchanged, according to Mellema. “The only explanation we have for this is that the subcontractor market has been aggressively trying to secure backlog for next year since there is uncertainty for what the construction industry forecast will be.”

Panelists were optimistic that prices will start to trickle down, but like Walker said, “they’ll never come down as fast as they went up.”

Developers can manage the high cost of materials based on a number of factors, including where they are in the project timeline and what options they have to decrease some costs or increase revenue on the back end of the project, according to Knott. The options they choose depend on the severity of the price increase.

For Knott, flexibility and coordination are key in today’s environment. A worldwide pandemic like COVID-19 means that overseas production of materials are impacted as well. As such, designers, suppliers and subcontractors must work together to reach alternate or new solutions, said Knott. “That was one of the first things we started working with our clients on — understanding what materials we had in hand, what materials were at risk of not being available when we needed them, and how to mitigate those risks to make sure we had a project that could stay on schedule.”

In addition to high materials costs, lead times for project planning are almost double what they normally are, according to Walker. Part of that is due to delays in inspections. “We have to manage that by being a lot more aggressive on our look-ahead schedules,” he said. “Instead of a three- to four-week schedule, we’re having to do an eight- to 10-week schedule.”

Walker also said that contracts between clients are being drafted with language that allows for scheduling flexibility and cost allowances. “It’s a lot of conversation and being open about the current situation,” said Walker. “We can’t predict the future.”

The Weitz Co. definitely felt the impact of COVID-19 in March, April and May, pointed out Mellema, but 85 percent of the company’s projects have remained active. “We managed the onsite conditions and we picked up most of the lost time on our construction schedules,” he said. “We’re sitting in pretty good shape.”

While government spending has slowed amid the pandemic, therefore impacting the budgets of state universities, private development is still going full force, said panelists. Private developers and equity partners are still interested in pursuing student housing and multifamily, which are viewed as strong market segments, according to Knott.

“The college experience is one that wants to be maintained and enjoyed,” said Knott.

In other words, even if their classes are only offered online, students still want to live in the college town and be with their peers. This mindset bodes well for the student housing development and construction industries, according to the panelists. In fact, Walker said he hadn’t seen a slowdown in project starts.

On-site occupancy of student housing properties in September was roughly 87.5 percent, according to data analytics firm RealPage, which tracks 175 universities. While leasing activity has maintained momentum, rent growth has pulled back, says RealPage. In April, asking rent growth fell 40 basis points month-over-month to 1.4 percent, compared with 2.1 percent in April 2019. By July, the rate had ticked down to 1.1 percent, the smallest increase the market has seen since October 2019.

“[Student housing] will have some bumps, but it’s a pretty insulated market segment that has a lot of interest and equity behind it,” said Knott. “No one’s walking away from deals that are on the table right now.”