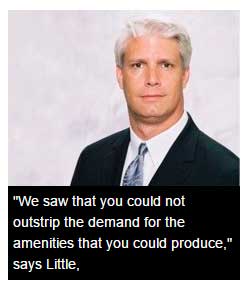 It wasn’t always the case, Little recalls. “When student housing began in the late 1990s into the 2000s as a subset of the greater multifamily construction arena, it was a lower-tier bracket,” he says. “Everyone who was in that arena at the time built a standard product, and it was very similar, actually.” Similarly basic: “the buildings were very simple and cost effective.”

How student housing evolved from that into its current state of the art is what Little has called “an arms race” in amenities. “As the 2000s rolled around, it became apparent that there was a demand for something better,” says Little. This took tow forms. One was location: instead of being situated a couple of miles from campus, the new product was now immediately adjacent.

But also we saw that you could not outstrip the demand for the amenities that you could produce,” Little says. “And it became very competitive in the student housing sector, especially in markets like a Texas A&M. This is one of the largest schools in Texas; there’s a lot of developable land and not a high barrier to entry. So how are you going to compete with the other guy who has 15 acres right down the street from the 15 acres you have? You compete on the product, and one of the ways you do that is through the amenities.

The amenities of today are a far cry from what many readers will recall from their undergraduate days, when a weight room and pool were at or near the top of a very short list. In the off-campus apartments Fountain builds today, “Our standard is a 50-inch flat-screen TV,” says Little. “In many locations, we provide them with a DVR or an Apple TV box or both.” Add wi-fi access throughout, queen-size pillow-top or foam-top mattresses, granite countertops, stainless steel appliances, ceiling fans and the like, and it’s “condo-like finishes on the interior amenities.”

Then there are the exterior amenities, starting with the high-tech 2015 version of what used to be a Spartan weight room. “The fitness facilities we build now rival any LifeTime Fitness or something like that,” he says. “It’s the highest-end equipment.”

Nor are gyms and pools the extent of those exterior amenities. Today’s student housing communities offer jogging trails and croquet courts, among other outdoor facilities, and Little says a recent trend has been catering to pet owners among the renters, with pet parks and pet wash stations.

Although construction costs have risen in student housing—to the point where they’ll be the subject of a panel discussion Little will be moderating at RealShare Student Housing—the expense of adding features like these is not likely to figure prominently in the conversation. On a $40-million project, the incremental cost of putting in these amenities is a few hundred thousands dollars more,” explains Little. “When you look at it on an incremental basis, it’s not very much. You get well more than that back in your incremental rent increase and then your long-term value creation.