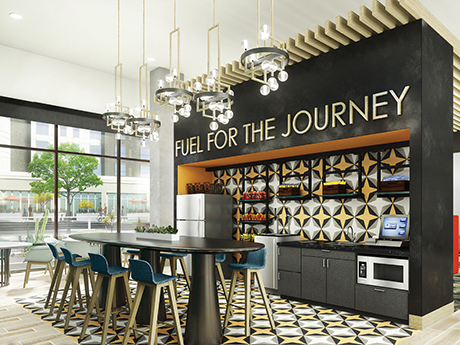 The student housing sector has evolved around the tried-and-true demand generated by college undergrads. But the graduate student market offers opportunities as well, and demand is expected to rise.

As many have observed, enrollment numbers of graduate students rose during, and as a result of, the Great Recession. It’s possible the same trend could arise from the post-pandemic era. “Historically, we have seen downturns in the economy result in people going back to school to pursue new or advanced degrees,” says Casey Petersen, chief operating officer of Peak Campus.

What degrees will be popular remains to be seen, but public health was already a growing area of study before the pandemic. According to the National Center for Education Statistics (NCES), more than half of the 820,000 master’s degrees conferred in 2017-2018 were concentrated in three fields of study: business (192,000 degrees), education (146,000 degrees) and health professions and related programs (125,000 degrees). Of the 184,000 doctoral degrees conferred, 62 percent were concentrated in two fields: health professions and related programs (80,300 degrees) and legal professions and studies (34,500 degrees).

While it could be a popular choice to attend graduate school, grad students tend to be financially strapped and carry more financial aid than undergrads, so they are looking to limit their expenses where they can.

“Graduate housing is different than typical undergrad housing in several ways,” says Williams. “We have had the opportunity to participate in focus groups and town hall discussions with graduate students on several campuses across the country, and what you hear is basically the same thing. Graduate students are older, value privacy, and are the most price-sensitive of any student population.”

“Grad students typically have less capital available for housing due to lower incomes,” says Brent Little, president of Fountain Residential Partners. “They may or may not have anyone who will sign as guarantors or co-signors for a lease, and they have just graduated and have notoriously little to spend on housing. When we have met with institutions regarding their grad students, they are often highly dependent on financial aid. The paradigm to that is they do not want to live in the most affordable housing types, such as three- to five-bedroom apartments. They are older, and some are creating households and they want more space, which costs more, and they want fewer roommates, which costs more.”

“We focus on understanding the target market for the housing community, such as single individuals, couples, families, etc.,” says Wilhelm, “and specifically tailor the program and unit types to meet the intended market. For example, a community targeting married graduate students or graduate student families with children may more closely resemble a multifamily program. However, if the target market for the graduate community is single students who have recently completed their undergraduate degree, higher occupancy unit configurations may be appropriate. Our programs, including indoor/outdoor community amenities and academic study spaces, are highly influenced by extensive student feedback gathered from focus groups and surveys.”

Universities and private developers continue to work on striking a balance between affordability and satisfying the needs of grad students, chief of which are privacy and walkability. Little says Fountain Residential’s new builds best address the need for graduate housing through what are called either studio, efficiency or micro units. These units range from 300 to 400 net rentable square feet. Fountain Residential has built 50 to 60 of these types of units in recent projects. “They are very popular with grads and post-grads,” says Little, “and bleed over into the shallow end of the workforce housing market.” 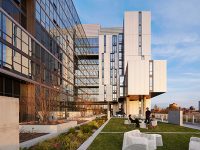 Over the past several years, Peak Campus has developed and managed a number of assets that have been designed to cater to the graduate student population. To guide their efforts, the company ranked the top 15 graduate markets by full-time enrollment in certain programs. “We then spent considerable time identifying those with the greatest demand and site availability for graduate student apartments,” says Petersen. To date, the results of this study include Pavilion at North Grounds at the University of Virginia (528 beds, 2015 build); Vue53 at the University of Chicago (339 beds, 2016 build); and The Overlook at St. Gabriel’s in Boston (555 units, delivering in 2020-2021). “We like the model and have several other projects in our pipeline in varying stages with a graduate student strategy in mind.”

“We also learned that graduate student projects have significantly lower turnover each year, which provides for a different initial absorption curve than we see in our undergrad projects, but also provides for a more stable occupancy thereafter,” Petersen says. “Where an undergrad student may be more willing to change apartments — and roommates — each year, graduate students are typically more focused on their studies, and given the intensity of their two- to three-year programs, they do not want to add the distraction of moving. We also learned that grad programs often operate with different academic calendars than undergrad programs, and that we needed to make appropriate adjustments to delivery schedules and expectations for leasing velocity.”

On-campus, many public-private partnerships (P3s) are delivering graduate housing that is in synch with the times, not to mention competitive compared to off-campus rents. “We have developed graduate communities in association with our university partners in a range of 10 percent to 25 percent below purpose-built student rental rates,” says Julie Skolnicki, senior managing director of university partnerships with Greystar. Greystar currently owns and/or manages five housing facilities that serve graduate students, with three currently under development. “We have seen increased interest and activity from universities to provide high-quality housing with a focus on affordability to help recruit and retain graduates.”

Similar to a common problem with undergrad housing — its aging condition — on many campuses, graduate students tend to look at their on-campus options and see mid-century fossils that have no appeal. But older properties can be renovated. The Maplewood Community that Greystar delivered at Cornell University, for example, took a functionally obsolete community and replaced it with almost twice the number of beds in a walkable setting with a higher percentage of studios, one- and two-bedroom units and amenities like a community garden and dog park. The community, which has 872 beds and opened in 2018,  is owned and managed by Greystar.

Michaels Student Living currently has three graduate-specific projects under development. The first is at the University of California, Davis, where the company is partnering with the university to develop 1,400 graduate student and family beds on-campus. It is also working with the Louisiana State University Health Sciences Center in New Orleans to build a 600-bed project that will house students from medical, nursing and dental schools, as well as faculty and staff. The third is at Dartmouth College, where Michaels is in pre-development for a 500-bed graduate housing project near the university’s medical campus in Lebanon, New Hampshire.

“Almost every RFP we saw last year, especially for on-campus P3 projects, had a graduate or faculty/staff component,” says Williams.

Greystar is developing a project for the University of Hawaii that will serve its graduate student population.

Graduate students prioritize value and privacy, but they are also best served by a different unit mix. Williams says a typical mix would be studios and one-bedroom units for those who truly want to live alone as well as two-bedroom units and four-bedroom, two-bath units, which Williams says were added to the mix based on feedback from graduate students. These units are the least expensive. Michaels also tries to include three-bedroom units, which are geared toward families, with one or two of the bedrooms typically being a child’s room or a nursery. “Three bedrooms is not something you see in undergraduate housing,” says Williams. “Any campus housing director will tell you that three-bedroom units are a constant source of roommate issues, with two roommates siding against the third.”

Inside a graduate-focused community, you would see fewer multi-purpose or programming spaces than you might find in an undergraduate property. “There are still sometimes small study lounges, but in general you see less common space,” says Williams.

As the industry begins envisioning how the coronavirus will affect development and education trends, it’s difficult to determine how or if social distancing will influence product types or demand. According to Wilhelm, the most dramatic impact on graduate student housing will be the potential for lower university enrollment. “Many university graduate programs have a strong international enrollment base,” he says. “International graduate students may have difficulty traveling to the United States and enrolling in their desired graduate programs. We expect universities will counter with enrolling more domestic students to backfill their enrollment. One final thought related to the global pandemic — in an environment where university budgets have been negatively impacted and students’ financial resources may be stretched, the continued focus on rental rate affordability will remain paramount.”

For some in the industry, the answer to how to adjust for the pandemic is simple: Do nothing.

“We have had COVID-19-focused discussions with many universities over the past month, and in the industry right now the hot topic for designers is, ‘what will be the new normal in student housing, and what will we do differently?’ says Williams. “For me, the answer is nothing. That’s not really popular to say right now, but think about it. Student housing is designed to be a safe place to live, and to force social interaction and learning. We will get past this pandemic, find treatments and vaccines. So we don’t want a permanent solution to a temporary problem. The buildings we design today will come on line two years from now, and we have to remember that. If there is another outbreak, the students will be sent home just like they were this time. But while they are on campus, they are going to live in buildings that are designed with the same goals we have always had.”